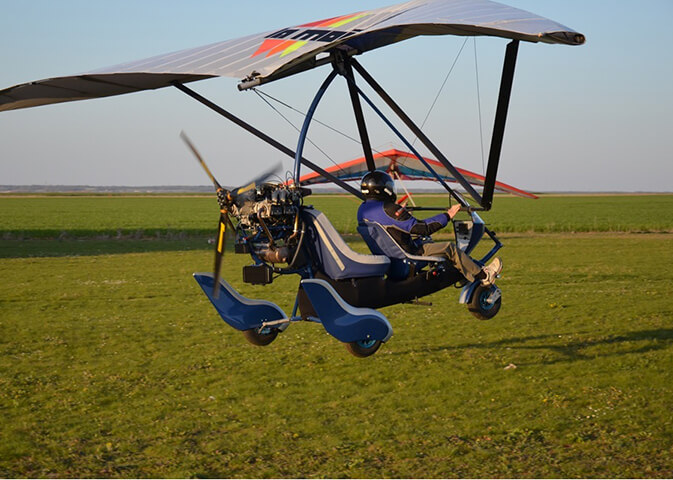 The trolley of a pendulum determines the comfort and the carrying capacity. It must be accompanied by an engine and a suitable wing. It is not advisable to put a heavy wing and a powerful motorization on a cart which does not have the necessary resistance to support them. Conversely, a spacious and heavy cart will only encumber a thin wing and a small engine will have difficulty propelling it.

The key points of a cart are :

The SAMSON is a small foldable and transportable two-seater trolley close to the liberist philosophy (exploitation of the air mass) and the paramotor (storable and transportable by plane.) The speed range is slower than the other two trolleys and allows short landings and takeoffs and to apprehend all kinds of terrain. The cart favors maneuverability, lightness and simplicity as well as the cost of purchase and maintenance. Its maximum payload capacity (PTV) is 270kg. The high modularity of the trolley and the numerous motors that can be adapted to it offer a wide spectrum of configurations.

The RUSTIK is the big brother of the SAMSON, heavier and more solid, it remains compact and manoeuvrable and can bear more load (450kg). Its autonomy and speed are greater, the motors that are adapted to it are more powerful and stamp Rotax reliability. The cart has no fairing at the front, and the console remains discrete for maximum visibility. The ULM’s shock absorbers and hunting are high to allow landing in paths or fields less paved than traditional aerdromes. The tank has a capacity of 70L.

The VENTURA is the top of the range trolley in our collection. Fully streamlined, the passenger seat is separate from that of the pilot. The seat and bottom bracket are adjustable to accommodate different rider sizes. Mounted from the ORYX wing range, it is a high-performance trolley for travel, distance and speed.